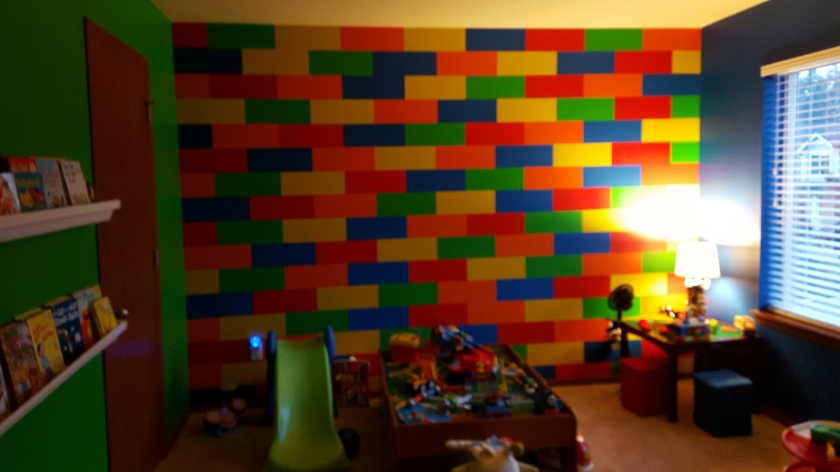 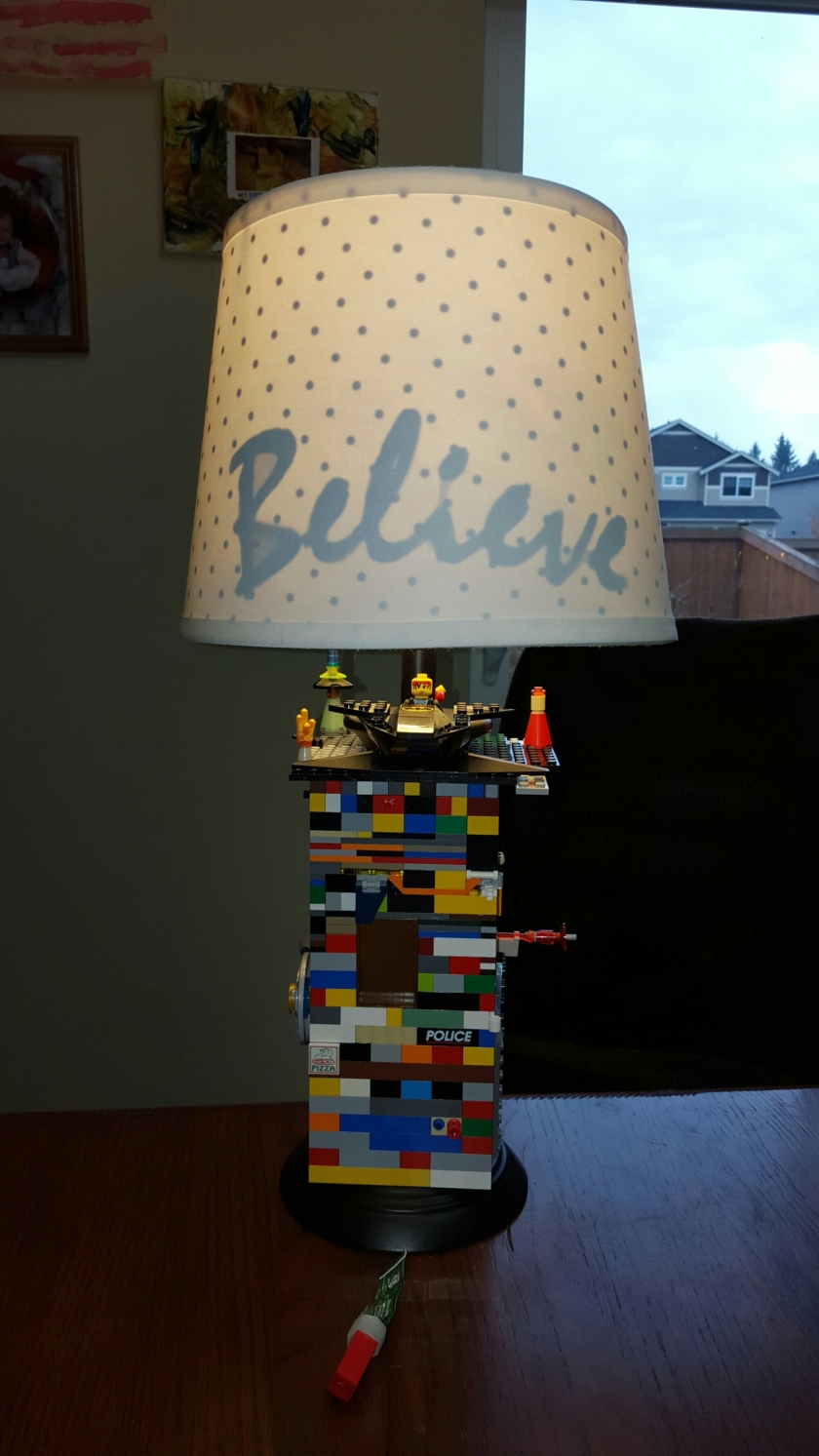 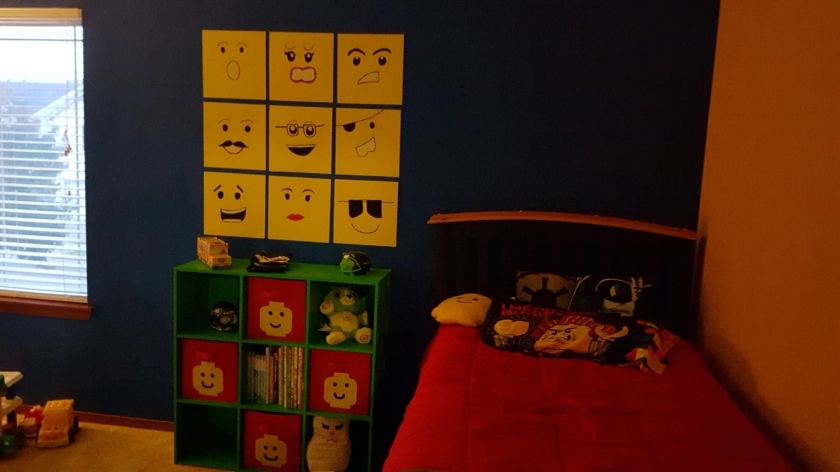 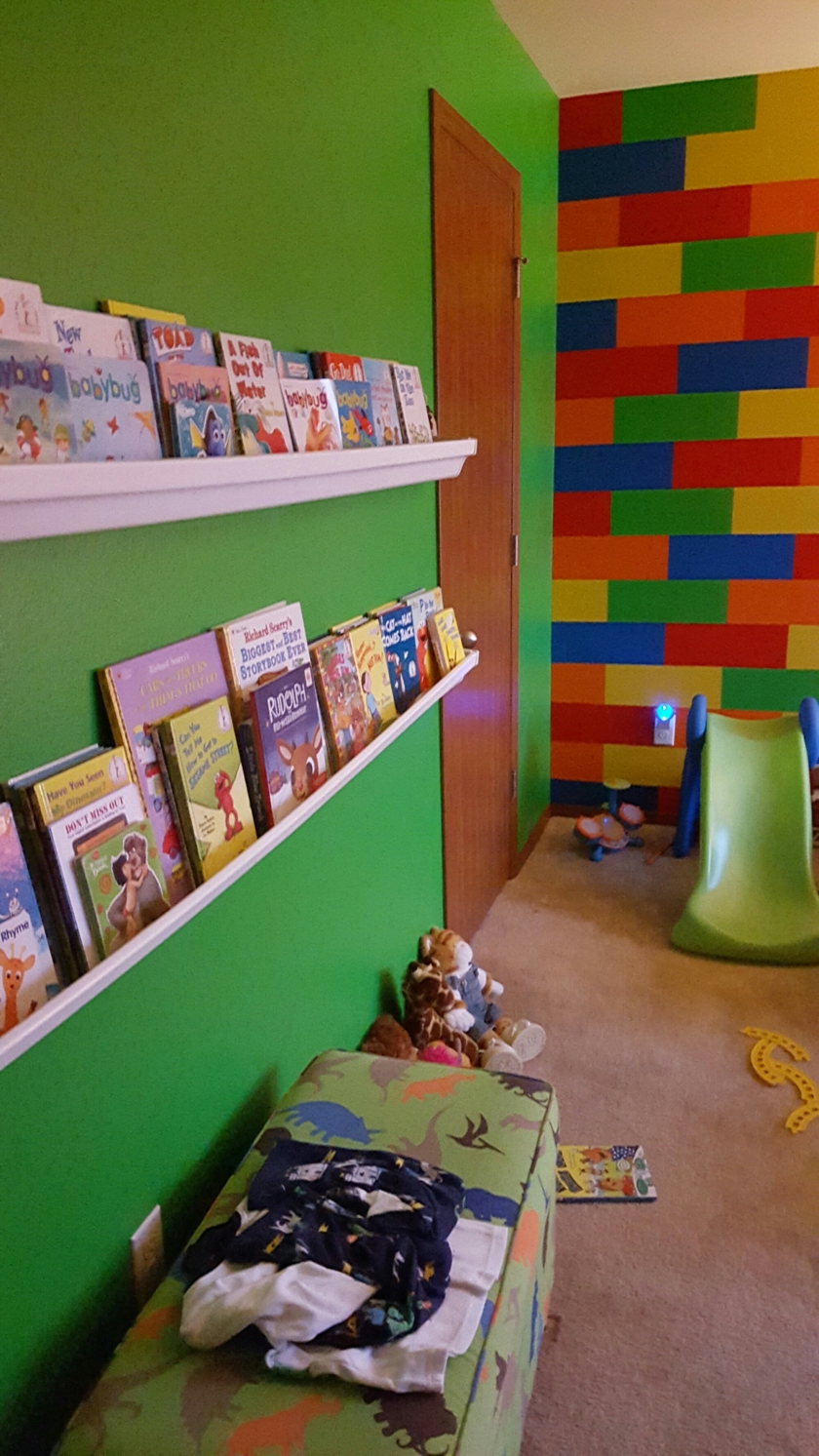 After I fell in love with DIY and crafting after my son was born I decided to redecorate our old guest bedroom into a fun Lego inspired bedroom for my little guy to grow up in.

Last September I began to work on the room starting with a DIY Lego lamp that was inspired by my love of Etsy.
I took a trip to my local thrift store to buy a lamp to use as my base and then took a trip to a Lego bricks store.  My son who was 2.5 years old at the time help helped me assemble at random which made this lamp even more awesome because of that. 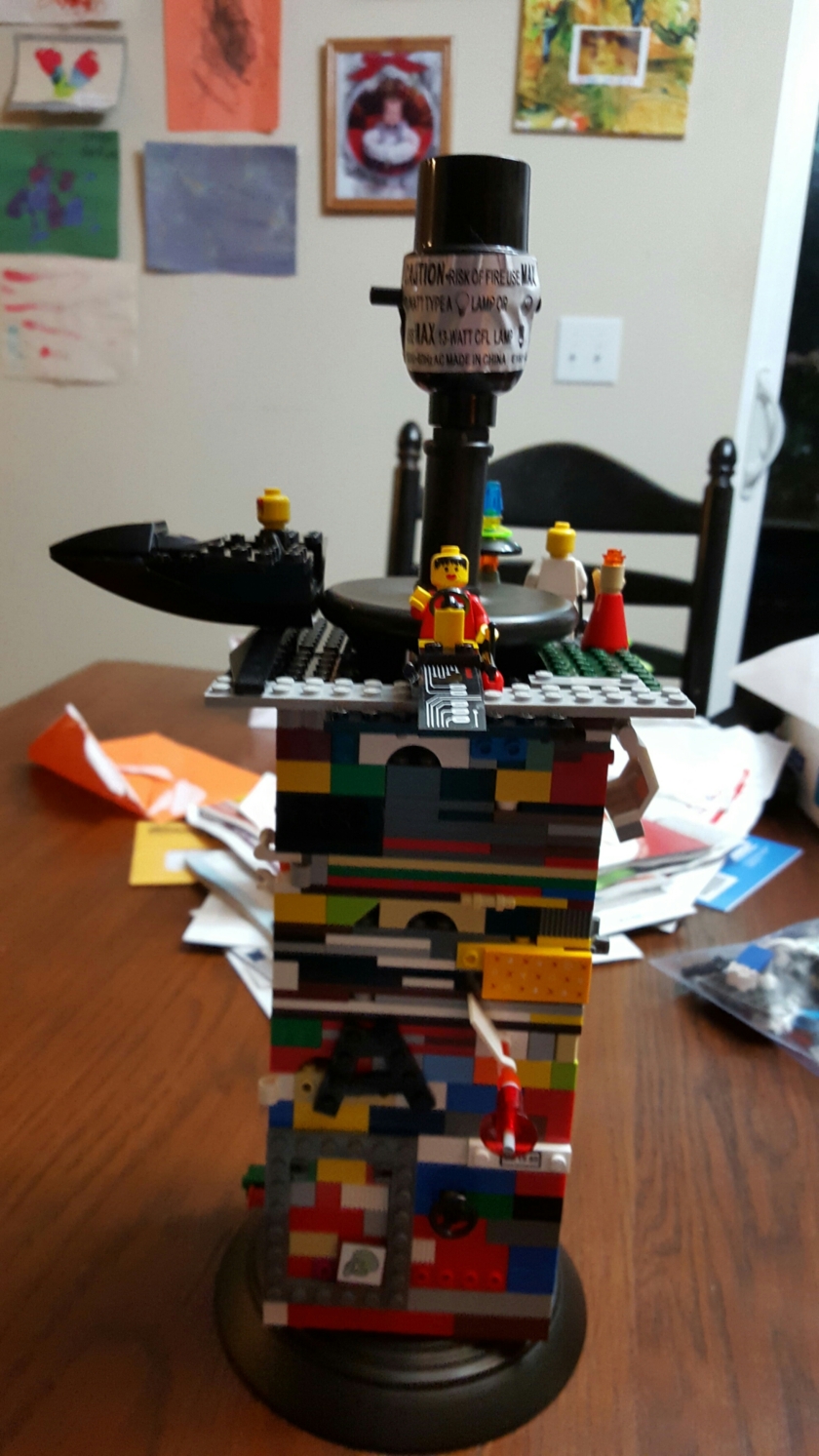 Since I love the idea of having a wall mural like in my son’s nursery, but not wanting to go a traditional route I decided to paint a Lego brick pattern on the feature wall.  This proved to be more difficult and time consuming than I ever thought it would be, but visually really paid off.

I went to my local Lowes with several of my son’s Lego Duplo blocks for them to do color matching in red, yellow, green, blue, and orange. I started by first painting the other three walls green, blue, and yellow. 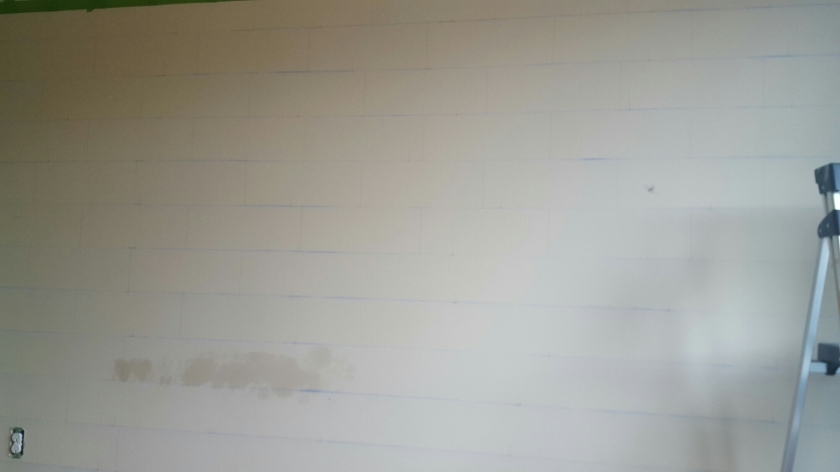 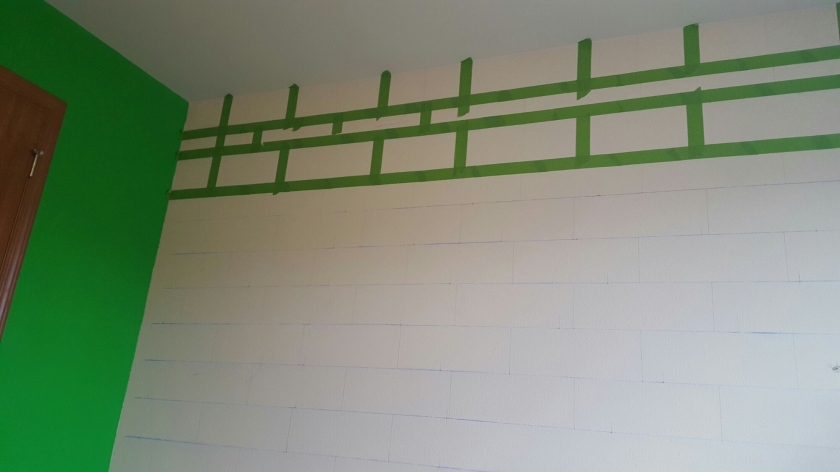 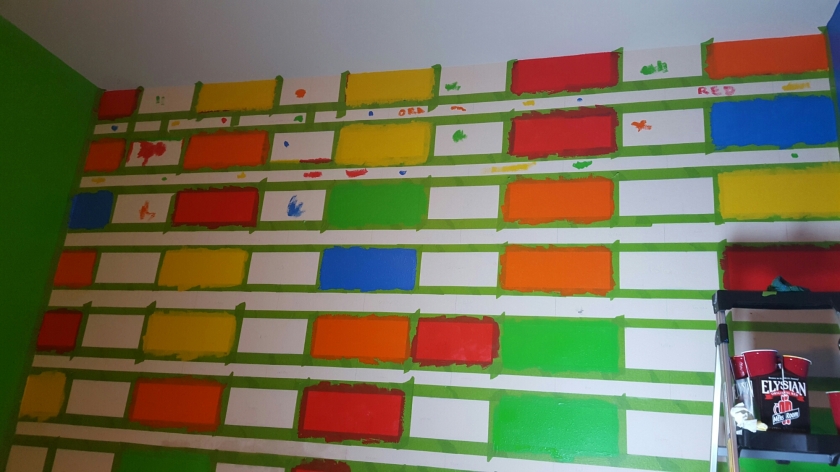 The process began with drawing chalk lines on the wall and then drawing the bricks on each row before taping and painting began. Every other row and every other brick neededs taped off before painting could begin.

If your walls are textured like mine are then you will need to rub the tape in very FIRMLY in order to prevent the paint from bleeding under the tape making a straight line. I ended up losing my finger tips to friction burns in the end, but this wall was very big.  It worked on nearly every one and only a few of them needed fixing which I did by using a paint brush to gently cut into straight lines.

After each brick has dried completely, remove the tape and re-tape the other sides for the rest of the blocks in each row. Once dried, repeat these steps on the other rows. 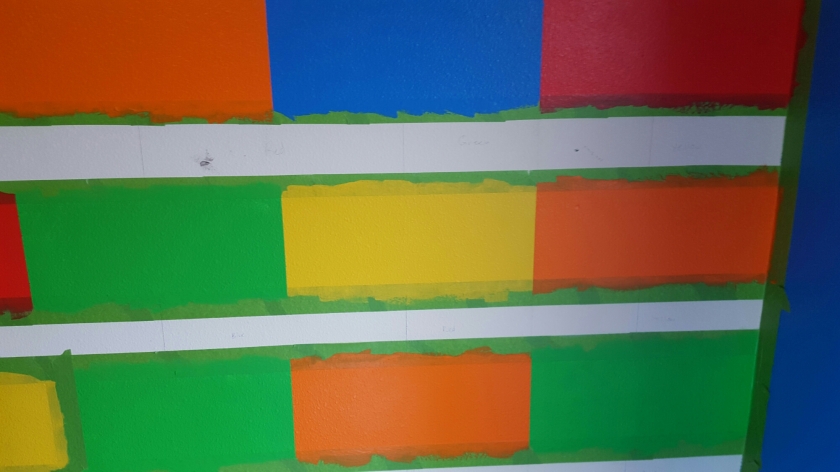 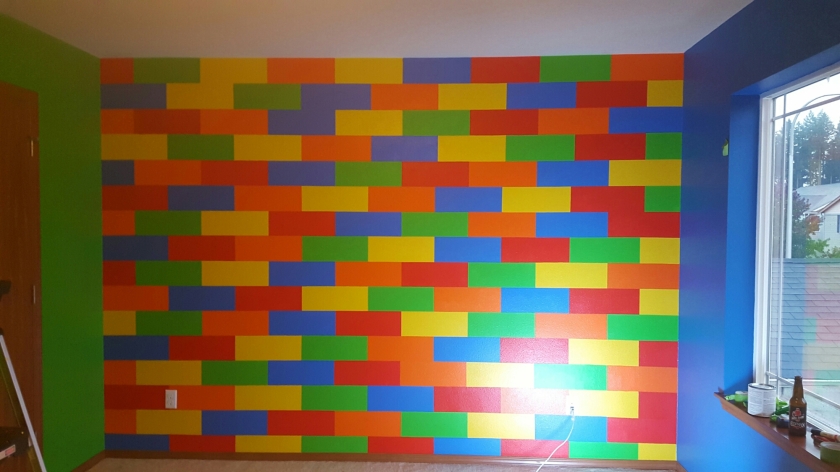 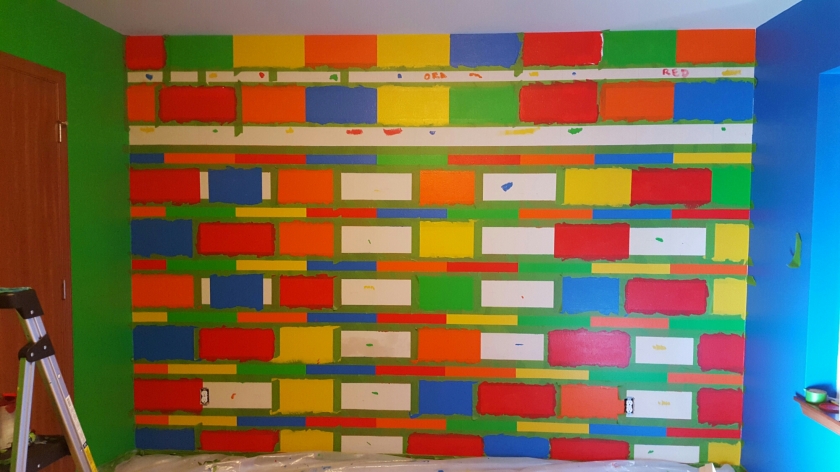 Next I made over an old cube system that we’ve had for years.  Since it had a formica veneer, the surface had to be sanded and primed before painting the shelves.  Next I glued round wood pieces I found at Michaels with liquid nail and after it dried I painted 3-4 coats of the same semi-glossy paint I used on the walls.  I painted it green since I knew I was putting the shelf on the blue wall for color contrast. 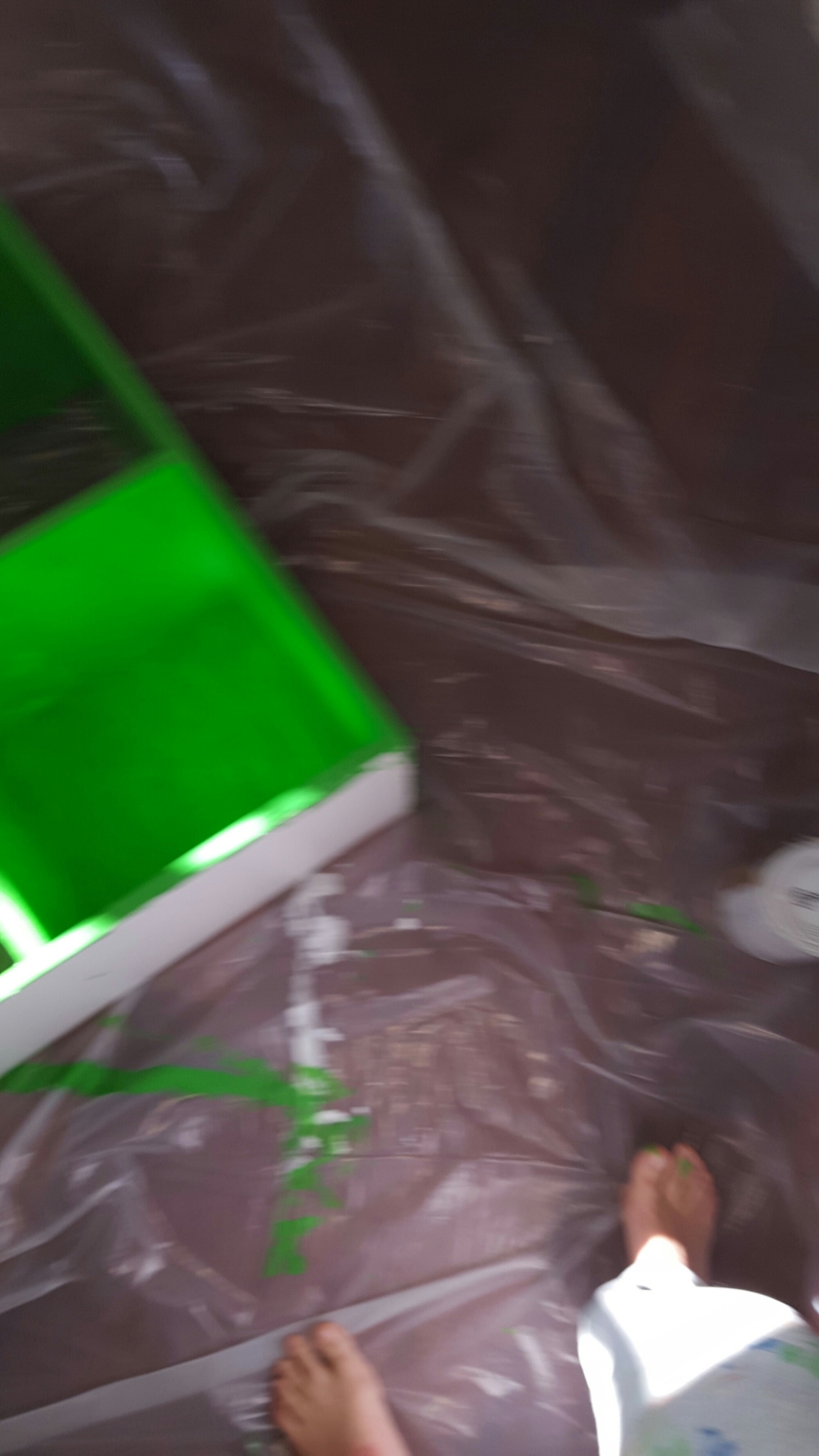 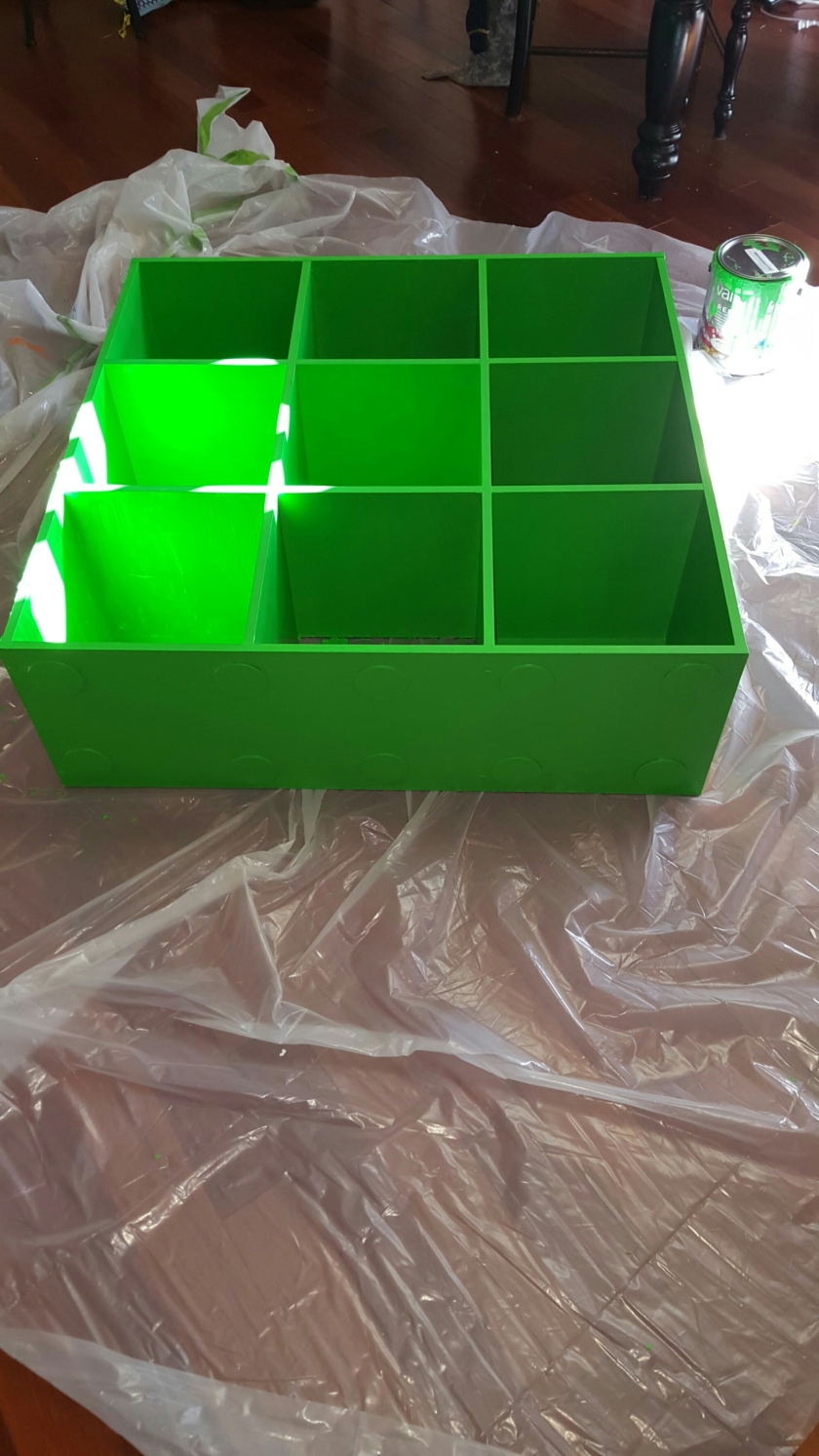 While drying you can start working on personalizing your storage bin Lego style.  I already had red cubes, and thought the color contrasts would be cute with Lego man faces on each bin. 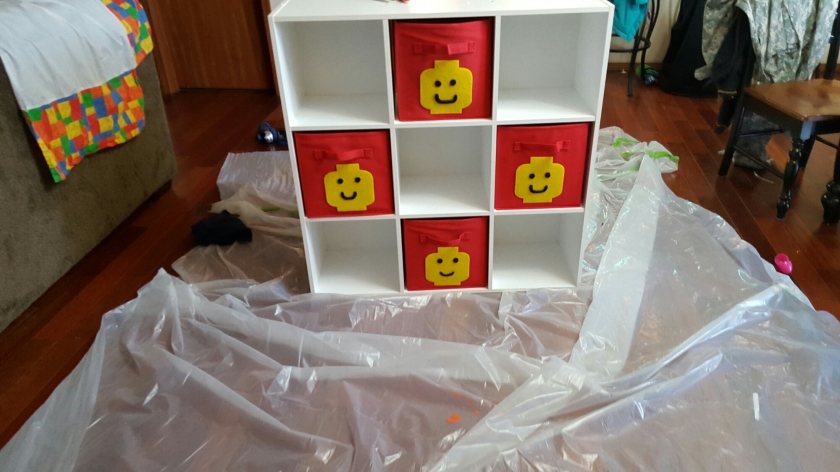 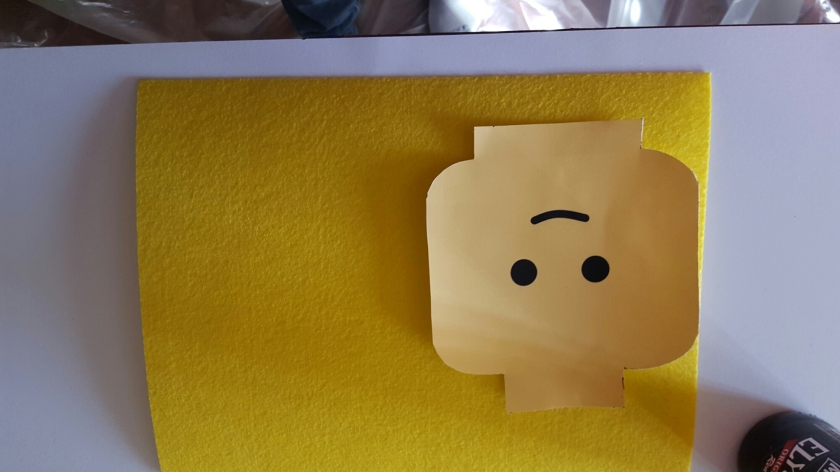 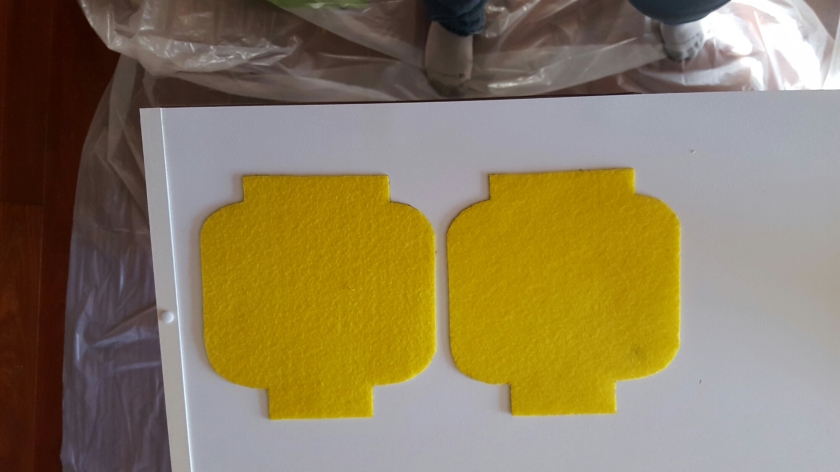 I printed out a Lego head in the desired size on card stock and traced onto stiff felt and then cut out with scissors.  I free style cut eyes and mouths for each bin and then used a fabric glue to glue each face into place.

Next I painted Lego man wall art with different faces on 9 flat 12″ by 12″ canvases that I had to add the hardware to hang it up myself that I purchased in a 12 pack from Amazon.  I used my Acrylic Paint to paint the background yellow and Sharpie paint pens for all other details, but if I did it again I would skip the pens and do it freehanded with a good paint brush because the two paints did not do well together. 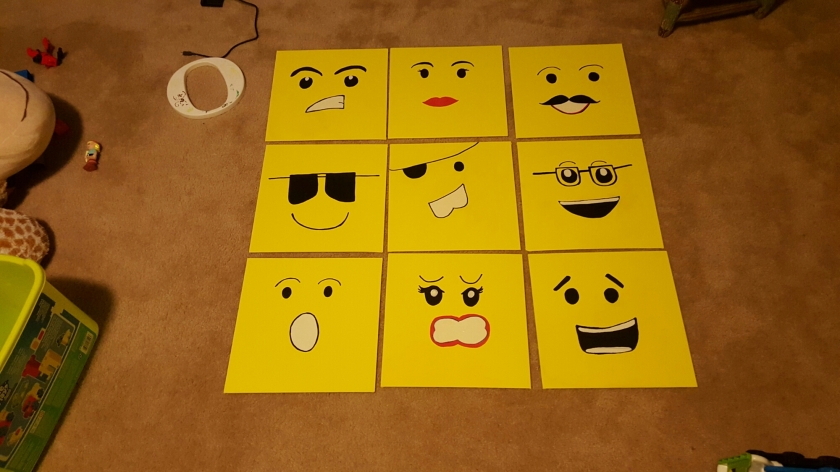 Since my son has a million books, we decided to DIY our very own rain gutter book shelves and they do work well! I liked the stark white contrast of the white against the bright green color, but if you want to you could spray paint them a different color.

To complete the look I repurposed letters that I had decorated in a jungle theme for my son’s nursery and “Kraggled” each letter with flat plates so I could randomly decorate each one to look 3D. 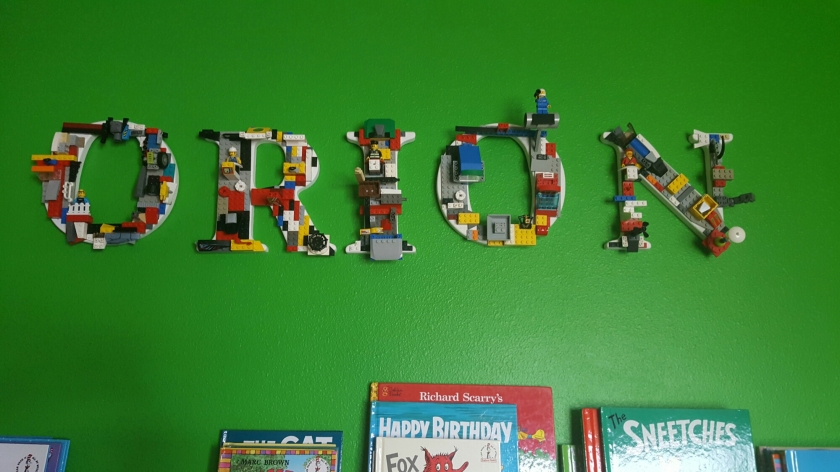 This was a very fun and colorful project to do and truth be told I hope that he NEVER wants to change it because that feature wall though simple, was a lot of work and I had too much fun designing the space!

This project isn’t technically complete because as he gets older I can redesign things to make decorations more sophisticated! I hope this inspires you to decorate your own Lego themed room for your Lego lover in your home!

Working mother with a toddler that inspired me to give crafting a try and suddenly I fell in love with the Hobby and I am determined to help others find this joy too! View All Posts

DIYing the Night Away

DIYing the Night Away